To celebrate 30 years of AVIS in San Vito Dei Normanni, (not the hire car company, but an important blood donating organisation in Italy) a highly acclaimed and hugely talented artist, Alfredo Passante, was commissioned to paint a picture which represents the importance of giving blood. Alfredo’s style of painting is Hyper-realism and his attention to details is incredible. I personally have never seen paintings so lifelike, I find it difficult to comprehend that his paintings are actually hand painted rather than a photograph. They are amazing!

After much thought, Alfredo decided to depict the blooded hand of Christ after the crucifixion, with droplets of blood falling on a white lilly, which represents purity and humility. Lillies are also symbolic with 30 years of marriage or other anniversaries, which is rather fitting in this celebration and another reason why Alfredo chose to incorporate them in his artwork! The commemorative painting was displayed in the main Piazza, and Alfredo was their supporting AVIS in their drive for new blood donors. A special anniversary dinner was also held at a local Masseria as a way of thanking the artist for his contribution and support of AVIS.

Alfredo’s work is truly amazing but his history is little short of a miracle. His mother, Giuseppina, is from Silanus, Sardegna and went to Rome to visit her sister, who married a Roman. His father, Angelo, is from my adopted home of San Vito Dei Normanni, Puglia but moved to Rome for work. He sold hats and scarves at the foot of the Spanish steps in the centre of Rome and this is where he met the love of his life. Shortly afterwards, she was diagnosed with meningitis and her prospect of survival was less than 10%. This prospect was further reduced when the doctors learnt that she was already two months pregnant. Angelo was completely devastated at this news and was deeply in love with Giuseppina and although she had little chance of survival he desperately wanted to marry her. The wedding was quickly arranged and they married. Her survival defied doctors and the birth of Alfredo was the happiest moment of their lives. Shortly after the birth, they all returned to Sardegna were Alfredo spent his first 8 years of his life. There, Alfredo was treated like a little prince by the locals because of his beautiful blonde hair; a rare sight in Sardegna, and their story of love and survival soon spread across the small community. 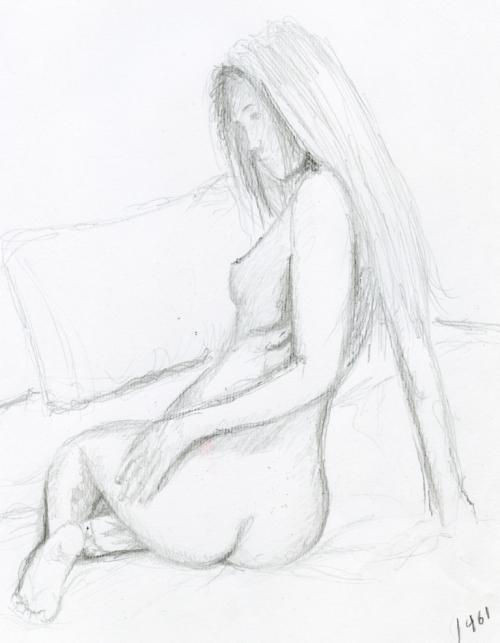 It seems Alfredo was destined to become an artist, and from an early age he was often seen with his oversized camera in the streets of Silanus, capturing daily life there. His passion for photography, naturally lead to him to pick up a pencil and transform a blank piece of paper into art. Early sketches of his work consisted of portraits, still life and nude women (even at an early age, Alfredo had an eye for the ladies! But not just capturing their form on paper, he informs me that it’s their brain he’s more interested in!). One of his earliest sketches was a portrait of his father, which he did when he was 6. To this day, his mother still treasures this piece with much love. He earned his first ‘wage’ at 13 years of age, when his school headmaster learnt of his talent and asked him to draw Goffredo Mameli; an Italian poet and author of the Italian national anthem. He received 500 lira for this work, which back in 1965, was a lot of money.

Alfredo aged 2 with his Mother and Father

With his oversized camera

Portrait of Alfredo’s Father by Alfredo when he was just 6 years old!!!

Portrait of Alfredo’s Father. Painted by Alfredo when he was 29 years old!

Alfredo continues to create incredible pieces of art, many of which he gets commissioned to do, and his work is sold throughout the world.

I feel very fortunate to know Alfredo and have him as a personal friend and who knows, one day, maybe he’ll paint my portrait!!! 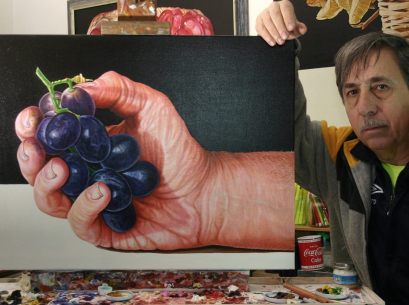