They say it’s not all about the food and ‘they’ may be right but at Masseria Il Frantoio, located near Ostuni, you will find passion and poetic stories, as Armando Balestrazzi (the owner), presents each plate of carefully crafted organic, Pugliese cuisine. His enthusiasm and quiet, calm demeanour, is truly captivating! Keeping with tradition and the ‘poverino’ (poor) way of cooking, Il Frantoio uses only fresh local ingredients, many of which are hand-picked, as and when required, directly from the grounds, some purposely planted herbs, others growing wild in the vast grounds of the Masseria.

Parts of the Masseria date back to the 15th Century, when it was first used as an underground mill for pressing olives, to produce oil (‘Frantoio’ is Italian for Oil Mill, hence the name!). The first stone mills were operated by donkeys; they would walk round and round in a circle, pulling a wooden post which was attached to a large stone wheel. This in turn would rotate around the central pole and crush the olives, to produce the oil. Originally, most of the olives pressed at the mill, were predominately used to produce oil for burning in lanterns to provide a source of heat and light, some was kept for cooking but primarily it was used for domestic use. With the invention of electricity, the necessity to produce oil for lighting diminished, and, over time, Puglia became an enviable region for producing some of the best quality extra virgin olive oil (EVOO), not only in Europe but the World! Therefore, it is no surprise that the Masseria still produces an array of EVOO, and many variants are accompanied with lunch/dinner. The Mediterranean climate, coupled with the fertile, calcium rich soil, that is brick red in colour, is the perfect combination for producing exceptional olives for eating and pressing.

But, I digress, let’s get back to the Masseria (Farmhouse), the artistic food, delightful management and staff, and the tranquil gardens that encapsulate it.

Logic dictated that the owner’s dwellings would be built above the mill and over the centuries, the once humble home, was extended, and extended, and extended, thus the Masseria was born! The structure is built of local stone and has stood the test of time. There are star vaulted and barrelled ceilings galore. Each room has its own character, a quirkiness about it, and reminders of times gone by are evident as you wander through the Masseria, the communal areas and the restaurant. There is a sense of calm, tranquillity and serenity as you pass through the various segments of vast grounds; the scent of the citrus groves hits you as you take a stroll through the enclosed walled Orchard. But don’t linger there too long as this area is generally several degrees warmer as it is super-heated by the powerful Puglian sun. If you want escape from the heat of the day, retreat to the shady traditional Italian garden, it is a perfect spot to relax with a good book and a refreshing prosecco or an afternoon Spritz. 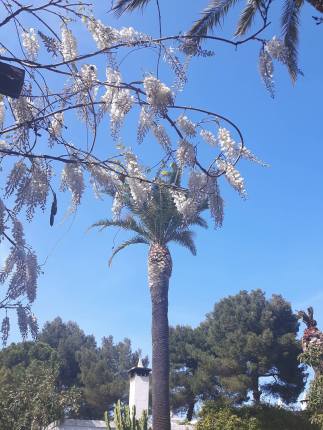 Lunch and dinner is served alfresco during the summer months and Armando is never short of a story or two to enlighten the guests about the organic ingredients used or the history of the wine. Each beautifully presented plate is brought to life by Rosalba; the Master Chef and wife of Armando. Rosalba not only uses fresh local herbs in her cooking, but ensures they play a big part in the presentation, too. Vibrant flowers from the wild herbs, bring each dish to life and create mouth-watering masterpieces. All of which are, accompanied by a selection of wines from the Puglian region, naturally!

It goes without saying, attention to detail and a passion for Puglian heritage, makes Masseria Il Frantoio a true Puglian Pleasure. 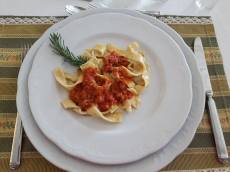