The day had arrived, I finally found my dream home in Southern Italy! Full of excitement I decided to explore the town and the community that I had just bought into. Meandering through the streets of San Vito Dei Normanni in the province of Brindisi, Puglia, my first impression was, ‘Where is everyone’? It was ‘Controra’, which means ‘against the hour’. This is a sacred time, when all businesses close, everybody downs tools, and hurries home for a home-cooked lunch with the family. I was unaware that people still adhered to this traditional way of life here. From one o’clock, til about four or five o’clock, people go home to spend quality time with their family. Incidentally, this is the only thing which is guaranteed to happen on time! 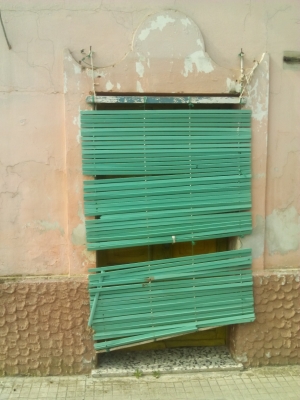 The place was a ghost town, and looked a little drab, like nobody had lived there for decades. Each doorway was covered by, what looked like tatty slatted blinds, disguising the opulent door behind it. I later found out, these ‘blinds’ are the iconic ‘Rezze‘ which are positioned in front of almost ever doorway in San Vito. They are designed to protect the door from the strong sunlight in the summer and humid cool air in the winter. But they also serve another purpose. They prevent passers-by nosing in when the door is open in the summer, and allows the air to flow through the house. But I think the real reason the locals place a Rezza (this is a singular form of Rezze), at the front door, is to enable the homeowners to look out into the street without being seen! The local saying goes “La vecchia cretu la rezza” which is Sanvitese dialect for ‘the old women behind the rezza’.

The Rezze are so iconic to San Vito Dei Normanni, that some of locals have got together to form a group in honour of them, called ‘Ama-Rezza’. Every August there is a big celebration in the town called ‘Rezzica’ which is actually a dual event for the Rezze and the Pizzica. Both originated in San Vito Dei Normanni. 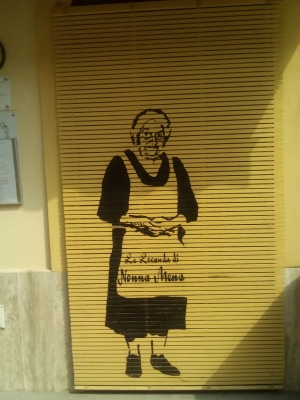 The people who run the ‘Ama-Rezza’ have decided to enhance the traditional Rezza by giving them a face-lift. In a street in San Vito, ‘Via Edison’, some of the rezze have been individually designed with an image which is significant to the town and the surrounding areas. Such as a basket of bread, a lady dancing the Pizzica, two lovers, and Nonna (Grandmother) inviting you in to her home for something to eat. Actually, the latter is a restaurant, serving typical local cuisine. It’s called ‘La Locanda di Nonna Mena’ and is definitely worth a visit; you really feel like you’re in Nonna’s dining room! Here they serve traditional Pugliese cuisine, all of which are seasonal, home-cooked dishes. Therefore there’s no menu and that’s part of the charm of the place.

So, if you happen to be in San Vito Dei Normanni during ‘Controra’, don’t despair, take a wander around the streets and seek out the beautiful, original artwork on the Rezze!

Lion amongst the Pine Trees (can’t say I’ve seen many lions around here!)

← Is this a dream: I Pastini white wines from the Valle d’Itria
Symbolic, Historic and Steeped in Tradition: The Holy Processions of Francavilla Fontana. →