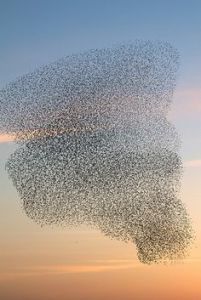 Swirling high in the sky, creating tornado funnel shapes, the migrating birds seem so majestic and intriguing, that I find myself gazing in wonder at their beautiful dance. But then ‘bang, bang, bang’, I’m jolted back to reality as the hunters close in on the poor defenceless birds. Do they really have to shoot these tiny birds, why? Population control?

Before I moved to Southern Italy, I had no idea that it was legal to hunt migrating birds, on certain days from September to the end of February. My first encounter was on the very first morning at our new villa, when I was rudely awoken with the sound of gunshot, and pellets hitting my window shutters. OMG what sort of place have I moved to? Why are they shooting at my house? It certainly wasn’t the warm welcome I was hoping to receive from the locals. I was too terrified to even peak out of the shutters to assess the situation.

Ever since that day, I have loathed the hunters and still find myself jumping out of my skin when they get too close. The dogs don’t care for them either and usually cower around my ankles. However, this morning whilst walking the dogs I stopped and chatted to a neighbour, who was out hunting, and we exchanged a polite conversation about the weather etc.

The conversation soon turned to the huge flock of birds swarming above. He was angry because the birds had eaten large quantities of his olives and he can only protect them (the olives) 3 days a week.

He explained that this is his livelihood and the birds are stealing his crop, which he usually sells to support his family. He also blamed the government for not allowing him to protect his land by shooting the birds more frequently, thus reducing the damage to the olives and provide him with an income.

On my return walk home, I contemplated what he had said and wondered if I was wrong to hold the hunters in contempt for killing such beautiful migrating birds, when many of them are only trying to protect their livelihood. Should they be free to protect their land? But what about the hunters who roam the countryside, killing birds just for the fun of the ‘sport’, without regard for others living in the, what is normally, very peaceful countryside. Is it right for them to hunt these birds just for ‘sport’? What is the compromise?