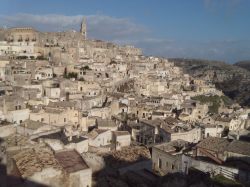 On the coldest day of the year so far this winter, my husband and I decided to venture to the mysterious and luring town of Matera, which is just across the boarder in Basilicata. Our journey started with bright blue skies and a cool breeze that whistled through to your bones. Along the journey we encountered four seasons in one day, sun, rain, wind, and even snow. For southern Italy this is quite rare. However, the weather mirrored Matera to some degree, cold as stone from the outside but warm and welcoming on the inside.

I would regard Matera as having four distinct zones, a modern cosmopolitan area; blending old and new architecture, the old town of Sassi, the abandoned forgotten dwellings of Sassi, and then the grottoes dotted on the hillside on the other side of the gorge. Each delightful, charming and unique. You may recognise the abandoned area from the many movies that have been filmed there, most notably, ‘The Passion of the Christ’ directed by Mel Gibson. I can see why Gibson chose this location, its windy narrow streets, hiding secrets from the past, reflects Jerusalem from times gone by. There is a strange eeriness to the abandoned city which was occupied until the late 1950s when poverty and disease forced the authorities to intervene and relocate the population to new accommodation elsewhere.

Matera is said to be one of the world’s oldest towns. The simple natural grottoes that dotted the gorge were adapted to become homes. In time, an ingenious system of canals regulated the flow of water and sewage, and small hanging gardens lent splashes of colour. The prosperous town became the capital of Basilicata in 1663, a position it held until 1806 when the power moved to Potenza. In the decades that followed, an unsustainable increase in population led to the habitation of unsuitable grottoes – originally intended as animal stalls – even lacking running water.

By the 1950s over half of Matera’s population lived in the Sassi, a typical cave sheltering an average of six children. The infant mortality rate was 50%. In his Christ Stopped at Eboli, Carlo Levi describes how children would beg passers-by for quinine to stave off the deadly malaria. Such publicity finally galvanised the authorities into action, and in the late 1950s about 15,000 inhabitants were forcibly relocated to new government housing schemes.

In 1993 the Sassi were declared a Unesco World Heritage Site. Ironically, the town’s history of outrageous misery has transformed it into Basilicata’s leading tourist attraction.