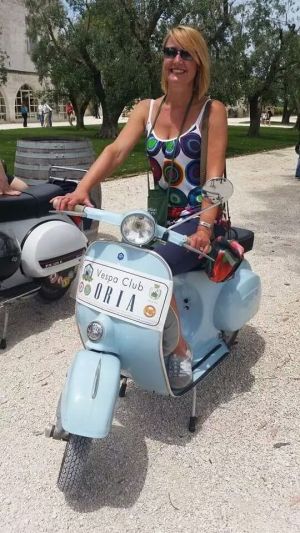 Last weekend in Puglia it was ‘Cantine Aperte’ where many of the wineries (Cantine) opened their doors to the public, to showcase their wines. So we thought it would be fun to incorporate this into our tour and have an extra special event; ‘Vino and Vespas’. Sadly I don’t have a Vespa, but I still wanted to travel in style, so opted for a chauffeur driven Mercedes-Benz instead! ‘Secondo me’, I think, this is the best way to travel whilst wine tasting! It was very luxurious, relaxing, and meant we didn’t have to waste any wine; we could swallow, rather than spit!!! Our chauffeur, Patrizio, picked us up promptly and we headed to the famous wine region of Manduria, to the first Cantina Consorzio Produttori Vini.

As we waited for the rest of our guests to arrive, it soon became apparent that the Oria Vespa Club were arriving on mass. The sound of their engines filled the air and people came pouring out of the Cantina to see what all the commotion was. Thirty or more Vespas filled the carpark, it was really a sight to behold. Some vintage Vespas were beautifully restored to their former glory, while others were more modern in design but equally as charismatic. “I want that one” I said, pointing to the baby blue coloured Vespa, it was stunning! 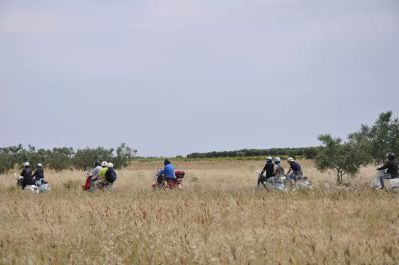 Vespas on route to La Pruina Vineyard. Image provided by one of our guests, Ian Allan 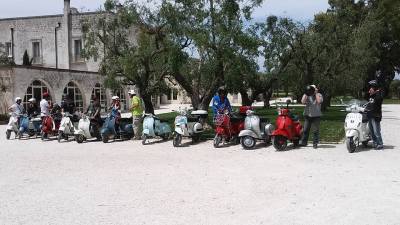 All dismounted, the festivities got underway! We collected our souvenir wine glass and pouch, then we were ready for action! Some took a tour of the museum and underground Cellars, while others headed straight to the tasting stations! 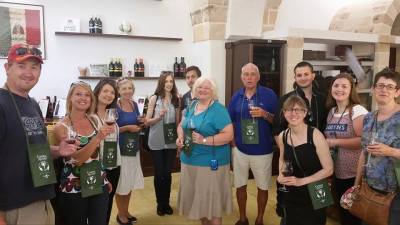 The Consorzio Produttori Vini Cantina has a wide range of excellent wines to choose from and the staff were very accommodating. Allowing you to try everything, from their fine Prosecco, Fiano wine, a selection of award winning Primitivo reds and even their top end wine ‘Sonnetto’. Quite often the Cantine ‘hide’ their top of the range wines on these opens days, so it was a real treat! This Cantina is a co-operative, and if you love your wine, you can come and sample all of their wines, throughout the year! If you want a guided tour of the museum and cellars, then it’s best to book ahead, check out their site for more details. 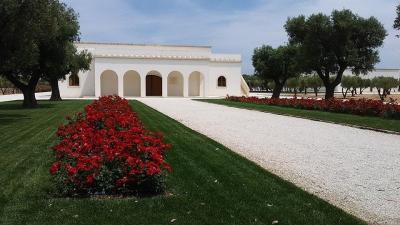 One down, one to go, before we headed to La Pruina Vineyard. Next up was Masseria Altemura, a magnificent Masseria, set in the tranquil countryside of Torre Santa Susanna. Two rows of romantico, deep red flowers, lead to the new cellar house, opposite was the old Masseria, built in the 16th century, which had been impeccably resorted. The tasting room had been assembled in the Masseria, so we headed straight there! Disappointingly, we had to pay extra for their wines, which isn’t in the spirit of the ‘Cantine Aperte’, which I believe was set up to showcase the wines, promote their brand and to generate new customers.

Feeling a little embarrassed, I explained the situation to our guests. Fortunately everybody was feeling a little gioviale after the first Cantina, and as we were there to taste some wine, then that’s what we intended to do! The wines were very good, especially the ‘Rosamaro’ pink prosecco, and I wished we had more time to savour all the flavours but lunch awaited us at La Pruina.

Fortunately, it was a short drive to the vineyard and when we arrived, everything was in its place. The hay bales were draped with light green cloth and adorned with a pretty red poppy. The tasting station was ready, as was lunch. By this time, we all needed a little something to eat, before we started tasting the fabulous La Pruina wines. Under the shady olive trees we tucked into our antipasti. This was perfectly paired with latest edition to La Pruina range, a Rosato wine (Rosè). I was so excited to taste this because it was literally bottled a few days ago and I hadn’t even had a sneak tasting! Not yet released to the general public, our guests (and I!) were privileged to be the first to sample the delicate, summer in a glass, taste of this translucent pink Rosato. It’s colour resembles a blush tinted skyline, with soft pink wispy clouds on a warm summer’s evening. Going by the reaction of our guests, it was a hit! 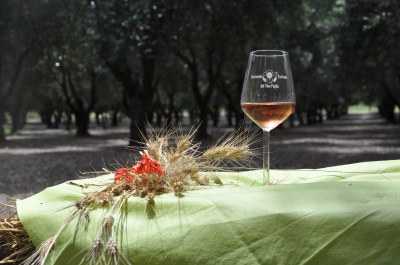 Che Bello Vino! Image provided by one of our guests Ian Allan 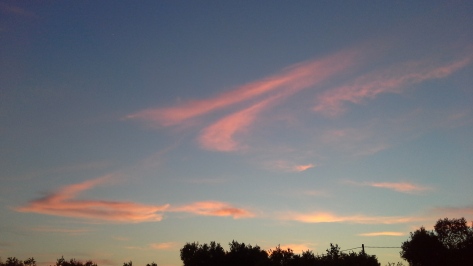 Meanwhile, Mamma was busy preparing the pasta and showed our guests how ‘easy’ it was to make various pasta shapes of this region. Two little girls watched attentively, then, with Mamma’s help they had a go at making Orecchiette. I must admit, their first attempt was far better than mine! It’s all in the wrist action! 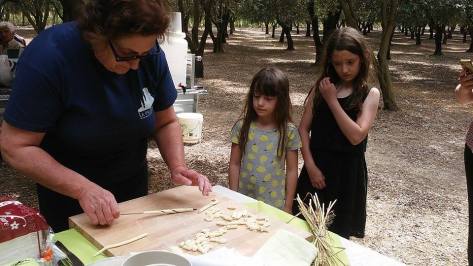 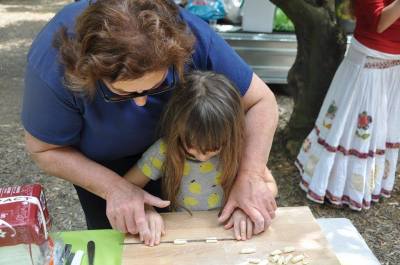 Mamma teaching a little girl the art of pasta making! 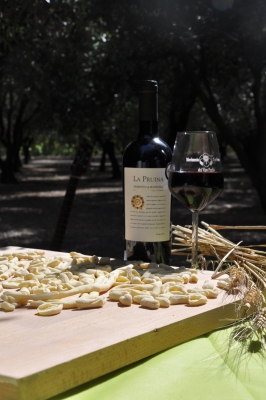 La Pruina Primitivo. Image provided by one of our guests Ian Allan

Antipasti was followed by an Orecchiette salad and then ‘Polpette’ meatballs, which was accompanied by La Pruina Primitivo di Manduria; a deep bold red, with plenty of character and a smooth lingering taste. By now everyone was feeling very relaxed and well fed. Time for some ‘musica!’ Dressed in traditional Folk attire, Daniela charmed the guests with her beautiful smile, harmonica and folk songs. After a few songs Daniela was keen to get the ‘Pizzica party’ started! She demonstrated a few simple steps, and encouraged every one to join in. They did, shyly at first, but then they soon found their rhythm! Such fun!

One of our American guests booked last minute for this event and she throughly enjoyed the whole Puglian Pleasures Experience. She gave us a glowing review and said it was “A glorious and unforgettable experience”.

Hope to see you at our next event!
Every Friday and Sunday during low season and Saturdays in high season.
Book your place now!

More amazing pictures from the Vino and Vespas Event! 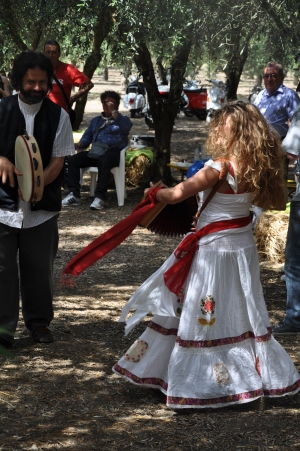 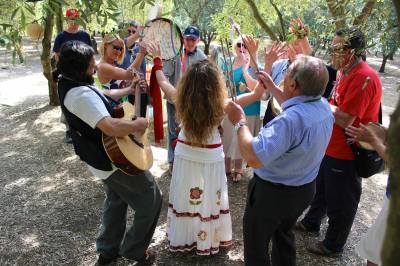 Guests having fun creating their own Pizzica music!!! 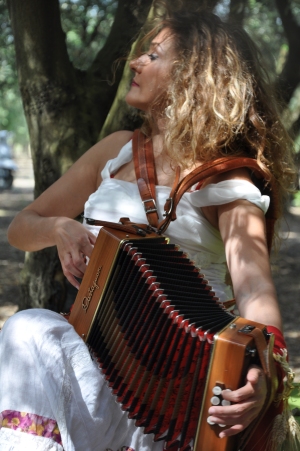 Harmonic Sounds of the Pizzica 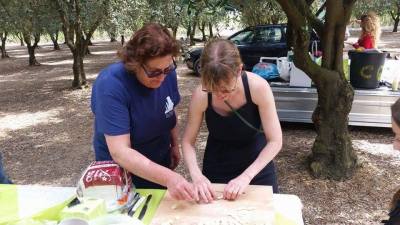 This is how you make Orecchiette! 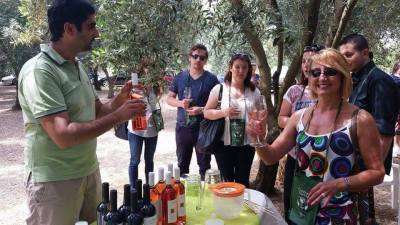 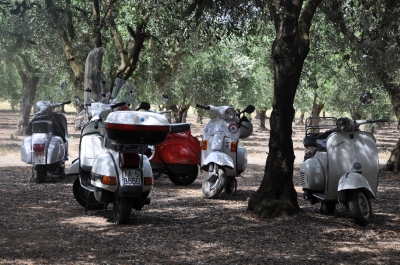 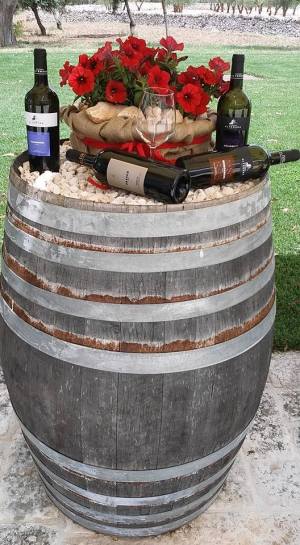 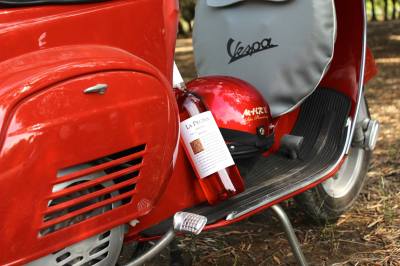 Image provided by one of our guests Ian Allan 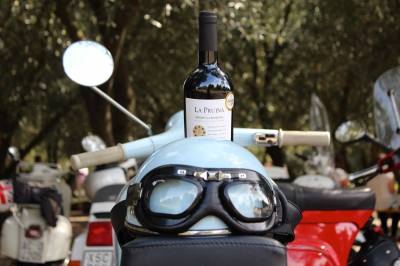 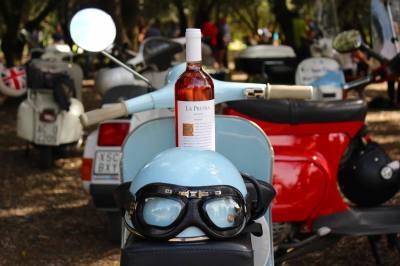 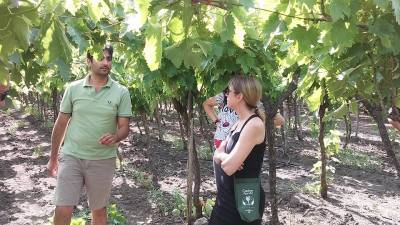 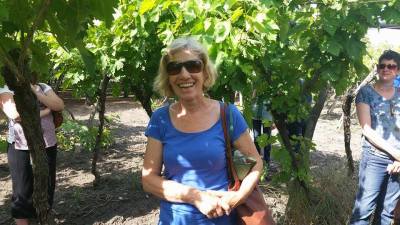 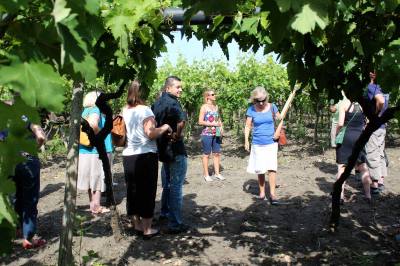 4 thoughts on “Vino and Vespas!”