Did Putignano Carnival Live Up To Expectations?

The Devil Politician at Putignano Carnival 2015

Well, I finally did it! After living in Puglia for just over 4 years, I finally managed to see the infamous Putignano Carnival! And I think I timed it perfectly! The weather was beautiful, the sun was shining and there was a little nip in the air, but it all added to the excitement of the Carnival!

After queuing to enter the city, buying an obligatory parking ticket, for €10 per car, then trying to find a space to park (there wasn’t, as I had thought, a designated parking zone, just a free for all, find a spot and get in it quick!), so, after traversing around the city with no idea where the Carnival was, I eventually found a space big enough to get my little car parked.

Getting in the Carnival spirit!

Following the crowd, I landed at the perfect spot, just across the road from the gateway to the old town, where there was a fantastic stall selling local hot street food and cold beers! So, to get in the Carnival spirit, I ordered a beer and the party began! After a short wait, and another beer, the Carnival was underway!

Full of colour, celebrating the iconic taste of Italy, first in line in the procession was a group of children and adults dancing, dressed as ‘Gelato’ – Italian ice-cream! From there the Carnival celebrated a few traditions of Italy, from a peasant wedding, to modern day politics and scandals. The costumes and dances, were fun and entertaining, but the grand floats were awe-inspiring. Far bigger than I expected, reaching two stories high, they were jaw droppingly good, shocking, amazing, exciting and somewhat gourdy.

A Selection of Pictures from the Carnival…. But the festivities did end there… Read on! 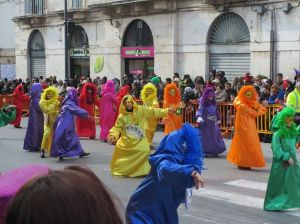 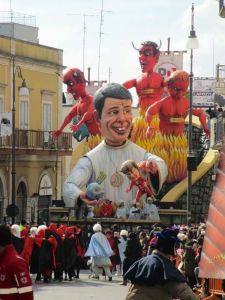 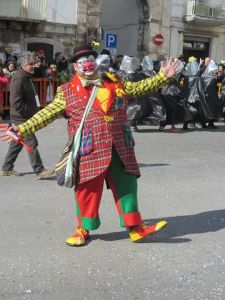 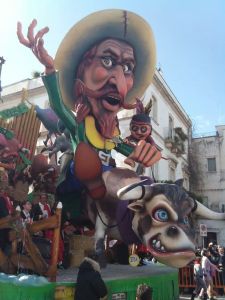 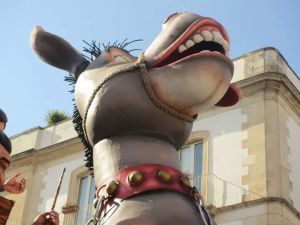 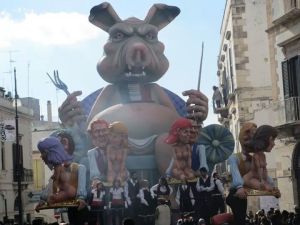 After a couple of hours and several bottles of beer later, the Carnival came to an end. What next? Rush back to the car and queue to exit the City? No. Let’s Explore! Right across the street from where I viewed the Carnival, was the entrance to the old city. Wandering the old, white washed, windy streets, I stumbled on the ‘after party’ at Piazza Plebiscito.

In the Piazza, a small band was playing local Pizzica music, and revellers were dancing with enthusiasm. The air was filled with happiness, and the smell of meat cooking on the barbecue. After the Carnival, the first thing on the minds of many Italians, was food! And after sourcing their late lunch, many relaxed in the sunshine on the steps of Chiesa Madre di San Pietro Apostolo. I had a chuckle to myself, seeing everyone eating on the church steps, reminded me of sea lions basking in the sun in the bay of San Francisco.

Wandering further into to the old city, I couldn’t resist the 50 centesimo glass of red wine, which was very good! (this is about 40 pence a glass!!!) before stumbling across the Carnival Museum. Featuring news clippings from times gone by, iconic costumes and paper-màche pieces, it was a great place to soak up the Carnival memorabilia.

Pictures from the museum 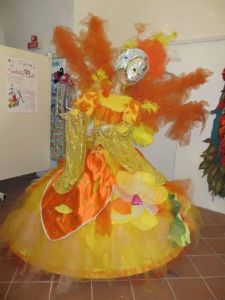 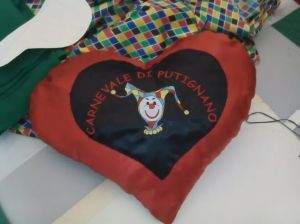 So, did the Carnival live up to my expectations? Yes! Would I go back again next year? Absolutely!

4 thoughts on “Did Putignano Carnival Live Up To Expectations?”