The Bearded Brides of Grottaglie! 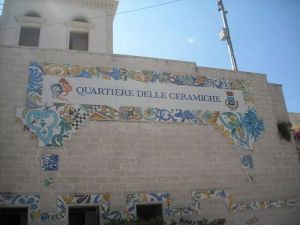 Beautifully hand painted tiles in the old quarters of Grottaglie.

Grottaglie, located in the Taranto Province of Puglia, is famous for its ‘artigianale’ pottery, in particular: ‘Pumi’, bearded brides and household crockery! It is steep in history and tradition which dates back to the 17th Century.

Grottaglie pottery is so renowned that it has been awarded a D.O.C (Denominazione di Origine Controllata). You may have seen this classification on Italian wine and the overall principles are the same. It is applied to preserve tradition and quality of the pottery of Grottaglie.

Wandering through the old quarters of Grottaglie, the pottery connection is very evident, and you are greeted with a beautiful display of handcrafted painted tiles. Ironically, directly below this display are the public toilets!

Artist studios are dotted throughout the old town and each studio doubles up as a shop where you can buy beautifully handcrafted ceramics direct from the artist. 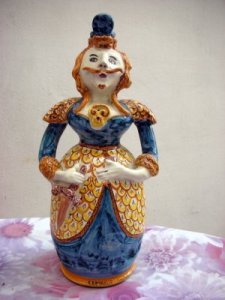 On my first visit to Grottaglie, what I was most curious about, was the big breasted bearded brides, they were everywhere and quite hideous. Who would want to buy one of those, I thought. I couldn’t imagine that it would look good in any home! As it turns out, these were produced to honour a local man who rebuked the selfish wishes of the French Prince (who was head of State at the time). The Prince decreed that all new brides, had to spend their wedding night with him. One young man decided to put an end to this ‘law’ by dressing up in his wife’s wedding dress and presenting himself to the Prince. Armed with a knife, he went to assassinate the Prince. Meandering through the dully light hallways, he made it to the Prince’s chamber. However, he was soon arrested because, in his hast, he forgot to shave and his disguise was revealed! There are two fables surrounding the outcome of his fate. One was that the Prince was bemused by his audacious plan, that he exonerated him and ordered him to handover all his good wine as a penalty for his actions. Another theory was that he was executed.

However, it is believed that from that day forward, brides were spared the ordeal of spending their first evening of marriage with the Prince. This legend inspired the local artists to create a Pumi ‘Le Pupe con i baffi’. In fact ‘baffi‘ means moustache but I used a little poetic licensing on the title of this one! 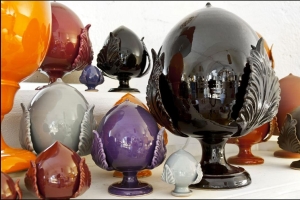 Pumi are infamous in Grottaglie and throughout Puglia. But what are they? They are bud shaped ceramics, with a small teet at the top, that rest on acanthus leaves. Each pumi is unique, handcrafted and beautiful decorated in Grottaglie. They have many symbolic meanings: good luck, immortality, prosperity, fertility, and it is believed that they protect the house from evil spirits. This is why they are often placed on the corners of balconies. 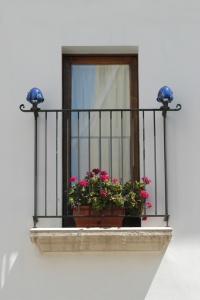 The local dialect name is ‘ Pumo de fiure’,  meaning ‘flower bud’. This derives from the Latin word ‘Pomum’ which is the Roman Goddess of fruitful abundance.

← Who should I kiss? – Italian Greetings
Puglia – Best travel destination as voted for by National Geographic! →