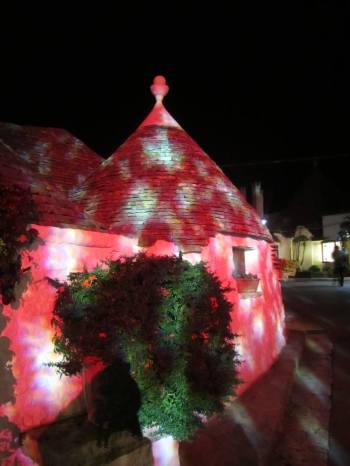 LIGHT FOR UNITY – LIGHT FOR PEACE

ALBEROBELLO – The Year of Light is coming to a close and Alberobello, city of the trulli, expresses sympathy to all the world’s cities that have been victims of the destroying force of terror-disseminating people. Only a few weeks to Christmas: our wish is that the light of love among peoples may shine again, warming everybody’s heart. From December 5th until January 6th, 2016 the trulli will be illuminated with multicoloured lights, so as to send out a message of peace and solidarity to all innocent victims. Stars, crescent moons, Christmas symbols and crystals shall be projected onto the cone-shaped roofs, creating a dreamlike and peaceful atmosphere.

UN’s General Assembly proclaimed 2015 as the International Year of Light and Light-based technologies, with the aim of raising civic and political awareness around light’s vital role in our daily lives. Unesco and several scientific organizations, educational institutions, research centres, and technology platforms have come together to answer the challenge.

The UN’s proclamation ad Unesco’s endorsement start from the fact that 2015 marks a few important anniversaries: the first studies on optics carried out by arab Ibn    Al-Haytham in 1015, Albert Einstein’s discovery of the law of the photoelectric effect in 1905, and progress in light transmission through Charles K. Kao’s research on fiber optics and his results in 1965.

Alberobello, first Italian city to join the initiative, has been on the UNESCO World Heritage list since 1996: in 2015 the first edition of the ‘Alberobello Light Festival’ even though it tool place in the low touristic season, attracted over 100,000 visitors. And brought the festival to rank 5th among most innovative European Festivals and 10th among international festivals.

The Summer Edition of the Light Festival, which took place in July and August 2015, was dedicated to Vincent Van Gogh and his famous “Starry Night” in the 125th anniversary of this artist’s death. Together, the two editions of the festival attrected to Alberobello over 400,000 visitors.

From sunset on December 5th until the night of January 6th, 2016 , the trulli will dress up in lights of many colours.

In order to make the festival even more attractive, the event organizers – Agit (Alberobello’s Young Tour Operators Association) and Lightcones – invited several performance artists who will enliven the narrow streets of the historcal center. This year, too, the event partners with the Municipality of Alberobello and with Natuzzi, world renowned company run by Apulian manager Pasquale Natuzzi. 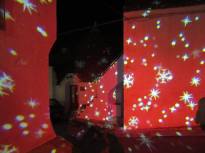